​Overall, my research seeks to (1) understand how differences among species shape variation in behavioral and physiological responses to environmental variation, (2) predict population- and community-level responses to natural or man-made environmental perturbations, and (3) inform conservation and natural resource management decisions. Below, I summarize some projects I am currently or have been involved with in the recent past.

Prey Naiveté and the reintroduction of the Island Scrub Jay 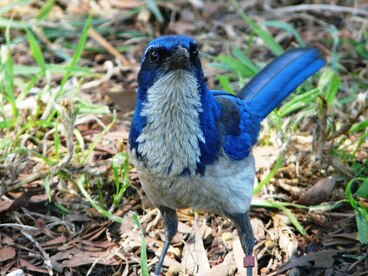 Species reintroductions are a key tool that conservation practitioners use to increase the long-term stability of threatened populations, but can have unintended and negative impacts on local populations. For example, reintroduction of predators can lead to declines in prey populations if prey have lost behavioral adaptations to identify and appropriately respond to predators. The Island Scrub-Jay is currently restricted to a single island making disease and island-wide wildfire major threats to the species long term persistence. Re-establishing a Jay population on adjacent Santa Rosa Island promises to increase the resiliency of the species and facilitate the restoration of native vegetation by accelerating seed dispersal. However, because Jays are a major nest predator of songbirds, their reintroduction may also lead to declines in songbird populations on Santa Rosa where species may have become naïve to the risks posed by Jays. Ecological theory about prey naïveté remains largely qualitative and does not make clear predictions about whether Santa Rosa species will recognize and respond appropriately to Jays. This illustrates the need for (1) the translation of general theory regarding the impact of predators into specific tools for conservation practitioners, and (2) an assessment of the likely impact of a Jay introduction on the songbird populations of Santa Rosa Island. I'm super excited to begin working on these issues in collaboration with the Smithsonian Migratory Bird Center, The Nature Conservancy, and Channel Island National Park.

The California Channels Islands are home to numerous endemic species and have faced challenges typically of other island ecosystems. For example, over-grazing by introduced deer, elk and pigs since the 1700s have greatly degraded the vegetation on the islands likely resulting in the decline and local extinctions of endemic species. The establishment of Channel Islands National Park on San Miguel, Santa Barbara, Anacapa, Santa Rosa and Santa Cruz islands and the joint-stewardship of Santa Cruz island by The Nature Conservancy initiated a period of intensive conservation management and change on the islands. Feral sheep and pigs were both eradicated from Santa Cruz Island by 2006, allowing vegetation to begin to growth back over wide swaths of the island (Pessendorfer et al. 2014). The last of the deer and elk were removed from Santa Rosa Island by 2011 and the vegetation on this island is expected to return to more natural states as well. Improving vegetation conditions are expected to improved habitat quality to the many species of landbirds that breed on the islands. Denser vegetation likely provides breeding birds with more food resources and safer, more concealed nest sites which should increase breeding bird densities and reproductive potential. Partnering with biologists and land managers from Channel Islands National Park and the Nature Conservancy, I'm analyzing land bird survey data using N-mixture models to assess habitat-specific densities of birds on Santa Rosa and Santa Cruz Islands and evaluate whether populations are increasing (or decreasing) following the eradication of invasive mammals. This work will provide a baseline assessment to build on for future monitoring actions on the islands.

It has long been recognized that some individuals in territorial species may not breed either due to limited territories, inexperience, or both. The ratio of floaters to territorial breeders and the transitions between them can have major implications for population dynamics because floaters can fill in when breeders die and thereby buffer the effect of disturbances on overall population vital rates. However, floater dynamics are typically unclear and are often not factored in to population models. I'm working in collaboration with the Smithsonian Migratory Bird Center, Channel Islands National Park, The Nature Conservancy, and Colorado State University to understand what factors drive the transition from floater to breeder and identify differences in habitat use floaters in the island, endemic species: the Island Scrub Jay. The work will provide information critical to monitoring the Jay population of Santa Cruz Island. Moreover, this study will produce useful knowledge about which individuals (1) will most readily breed successfully if translocated to Santa Rosa Island and (2) would not impact Jay populations of Santa Cruz Island if they were removed. 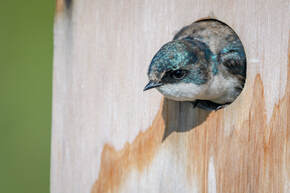 Aerial insectivore populations are declining over a large part of their range, but the ecological factors driving these declines are unclear. Climate change is often invoked as a probable cause and could influence key demographic rates in multiple ways. Warming temperatures may reduce food availability during the breeding season and limit resources available for parents to allocate towards parental care and self maintenance (food availability hypothesis). Alternatively, warming temperatures could have direct effects on parental energy expenditure by limiting the ability of parents to off-load body heat and thereby affecting reproduction or survival (heat dissipation limit hypothesis)l. Previous work has provided mixed evidence for the food availability hypothesis and the heat dissipation limit hypothesis has only recently been tested in wild birds and has not been considered as a driver of population declines. ​I have been working together with Devin Landry from the Center for Natural Resources & Environmental Policy, Creagh Breuner from the University of Montana, and Beau Larkin from MPG Ranch to help separate these ideas. 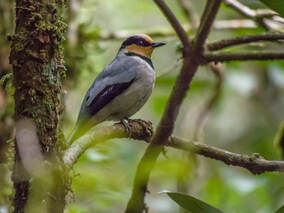 Droughts are expected to increase in frequency and severity with global climate change. Theory predicts that the population impacts of harsh environmental events, like drought, will vary with life history strategies among species. However, existing demographic models generally do not consider behavioral plasticity that may modify the impact of harsh events. Tom Martin from the Montana Cooperative Wildlife Research Unit and I show that tropical songbirds in the New and Old World reduced reproduction during drought, with greater reductions in species with higher average long-term survival. Surprisingly, the large reductions in reproduction by longer-lived species was associated with higher survival during drought than pre-drought years in Malaysia. Shorter-lived species maintained reproduction and experienced decreased survival in drought years. These results are suggestive of a cost of reproduction in the wild. Stochastic population simulations showed that behavioral strategies of longer-lived, but not shorter-lived, species largely mitigated the effect of increasing drought frequency on long-term population growth. Ultimately, behavioral plasticity can buffer the impact of climate change on populations of some species, and differences in plasticity among species related to their life histories are critical for predicting population trajectories. 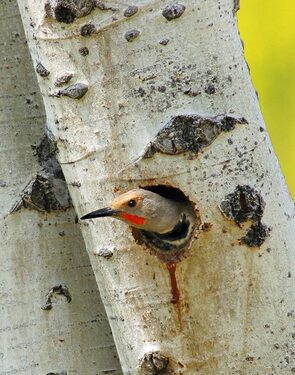 Some of the most visually striking and exciting sights in nature are large herds, flocks, schools, and colonies of animals. Animals may benefit from being in a group with other species because it can reduce their chances of being killed by a predator, but on the other hand, large groups can attract predators. Competition over resources (i.e. food or breeding sites) between similar species can also cause fighting within the group making it difficult for groups to form. This suggests that similar species that often fight should keep their distance and not form groups. However, birds that nest in holes in trees (cavity nesters) are well known for aggressively attacking one another, especially around nests, can be seen sometimes nesting together in the same tree. How commonly does this occur? Why do they share nest trees in the first place?

​I set out to answer these questions by looking at whether the number of nests sharing trees changed in years with different availability of nest sites and risk that a predator eats the eggs or offspring). They found that sharing nest trees was more common in years with more nest trees and in years with higher risk of nest predation. They also found that nests in shared trees were less likely to be depredated than solitary nests, but only in years with high risk of predation. Together, these findings suggest that birds may fight less when nest sites are abundant, allowing them to nest close together more often and that birds may nest close together even when then fight if predation risk is especially high. Still, experiments are needed to fully understand these patterns. Ultimately, it seems that even though they are known for fighting, cavity nesting birds tolerate nesting together in the right conditions.

Predation risk and the balance between survival and reproduction 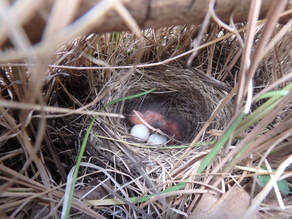 Predation is a ubiquitous ecological force that plays a major role in the evolution of traits important for fitness. Where predation risk is predictable and variable, prey species are expected to evolve plasticity in traits that reduce the likelihood of being killed and eaten by predators . Such plasticity may be especially critical for the survival of young offspring because they are particularly vulnerable to predators and suffer high levels of predation across taxa. Yet the fitness effects of predator-induced plasticity are not always clear. Plastic responses to offspring predation risk that increase offspring survival early in life may yield survival costs during subsequent life stages. Moreover, parental responses that mitigate predation risk for offspring may reduce lifetime parental fitness. Given the importance of predation as a driver of population dynamics, understanding the fitness consequences of predator-induced plasticity is critical. In a series of studies, in a community of songbirds in central Arizona, USA, I experimentally manipulated perceived predation risk in multiple species to examine predator-induced plasticity in several phenotypic traits including daily energy expenditure (as measured with doubly-labelled water), nestling growth and development, fledgling flight performance and survival, maternal hormone deposition, and various metrics of parental effort. This work was conducted in collaboration with Blair Wolf from the University of New Mexico, Bret Tobalske from the University of Montana, Natalie Wright from Kenyon College, and Tom Martin from the Montana Cooperative Wildlife Research Unit.

Maternal hormones, population structure, and the development of behavior 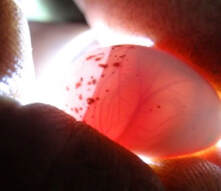 In a wide range of taxa, mothers expose their offspring to variable quantities of hormones that can have major implications for development and fitness of offspring. These "hormone-mediated maternal effects" are intriguing because they can allow mothers to transmit information about the environment to offspring and enable them to develop phenotypes that are best suited to the environment they will experience. For example, Western Bluebirds lay eggs with higher levels of testosterone when population densities are high and the availability of nest sites is low. These eggs yield dispersive offspring that leave to find a new and better habitat patch to breed. However, maternal testosterone (and other hormones) can influence many different traits with varied effects on fitness and it is unclear whether selection on life history traits important for population dynamics acts on these pathways. Moreover, the mechanisms underlying the effects of maternal hormones on offspring are unclear making it difficult to understand their ecological function. I've been collaborating with Renee Duckworth from the University of Arizona to address these issues.

To learn more, check out this article!